~Not to be confused with the Sledgehammer, a weapon given to Russian and Polish partisans (which you can actually kill people with ) .

The Hammer is used by sappers to construct defenses for their team. It has a brown wooden handle, and a black-colored head with metal on the front of it.

You can also press X with the hammer to make the hammer break constructs.

You can also repair other structures, such as doors and windows.

The sapper constructs are:

Stakes -  Stakes are constructs made to kill cavalry instantly, no matter what momentum. It can also serve as a ramp for climbing over fences, which is useful because you can't jump. You generally should not place this on maps without cavalry. When deployed, it looks like a group of wooden stakes together.

Large Sandbags - Pretty self-explanatory, it has three layers. Five sandbags on the bottom, four in the middle and three on the top. This is normally used with a large dirt mound. When deployed, it appears in a big pile of sandbags, with only 1 missing layer.

Small Sandbags - A smaller version of the large sandbags. It has three layers, three on the bottom, two in the middle and one on the top. When deployed, it appears in a small pile of sandbags with one missing layer.

Gabion -  Gabion is a construct in which dirt, rocks, and sand are stored. Gabion is mainly used to cover up small gaps that other constructs can't block off. The gabion has sand inside it with clothing and 4 wooden cylinders that hold the clothing. When deployed it appears with two wooden cylinders and one sandbag. Some players joke it's a "Soup Bowl".

Large Chevaux -  Large Chevaux or Chevaux De Frise serves to block movement, making it quite good protection against enemy infantry. However, the enemy can see through it, which will let them plan an attack. When deployed it looks like a pile of wooden planks.

Small Chevaux - A smaller version of Large Chevaux. This is extremely useful to block enemies from getting to you while still being able to shoot them. When deployed, it looks like a small pile of wooden planks

Barricade - A wall-like structure about the same height as a player, with stacked wooden logs placed within 4 wooden posts. It is relatively fast to build, making it great for offensive sappers. When deployed, it looks like a horizontal pile of logs.

Fence - Self-explanatory, it's a wooden fence. There's no real reason to use this. When deployed it looks like a pile of thin planks.

Crate -  A crate, self-explanatory. It is a wooden box with yellow paper on the front. It is good when combined with small dirt as officers can stand on it to get a better view. When deployed it appears as a pile of very very small planks. 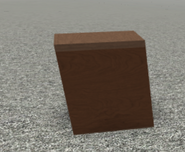 Barricade
Add a photo to this gallery
Retrieved from "https://roblox-blood-iron.fandom.com/wiki/Hammer?oldid=14543"
Community content is available under CC-BY-SA unless otherwise noted.